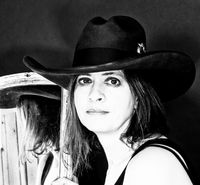 Kathleen Dunbar's original track Snakecharmer from her second album of original americana-rootsy-bluesy songs The Storm In Our Head is currently nominated for the 2020 Just Plain Folks Best Spoken Word Song. The Just Plain Folks Music Awards will be announcing winners some time this year. Brian Whitney, CEO and Founder of Just Plain Folks, writes of the nomination, "It's a big deal: 17K albums and 240K songs were entered for the current awards, which cover the expanse of time since the last awards in 2009."